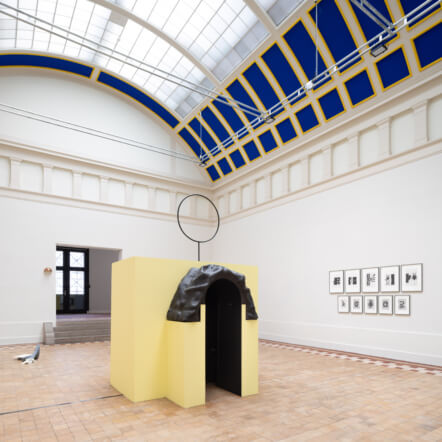 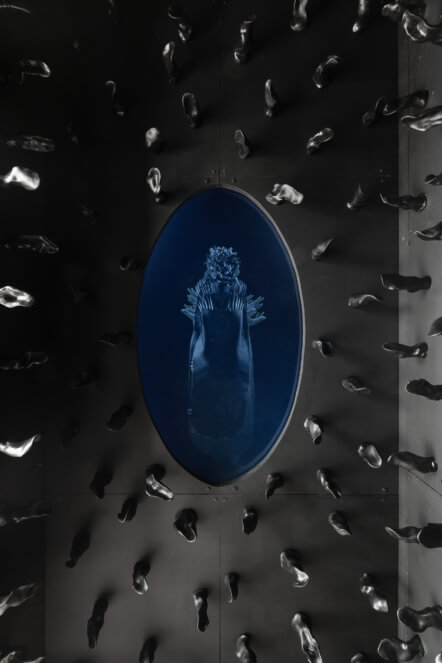 In the installation Tomb of Woe the audience is encouraged to step into the intimate sphere of the chamber of sorrows for an individual transcendental therapeutic grieving session. The viewer is placed in a massage chair, draped in the sound of a hypnotic voice dealing in its speech with existential sorrow as the basic terms for everything living: humans, animals and objects. Meanwhile, this sorrow is being neglected because our self-improvement society, dedicated primarily to working on excellence, has no place for it. But here in the dark the sorrow can be held, and the deep distress, referred to by the word ‘woe’, is drawn out and vocalized in the installation by a materialised being – a hybrid of the human, the afterlife, and the sorrow – by localising the sorrow in the viewer’s own body, and addressing it through healing body movements. Tomb of Woe takes a holistic mind-set as its starting point, discussing themes such as spirituality, human needs, staging, existential grief, and the therapeutic potential of dance.

In her practice, Nanna Katharina Jensen has worked within a broad range of medias such as; sound, video, sculpture performance and installation, often combined in different ways. Jensen has in the last number of years been engaged with ritual, spiritual and psychological phenomena as well as instruments in her works, which through a secular and poetical approach in a playfully and provocatively way merge fantasy and reality. Jensen’s practice examines the big societal and existential issues relating to the human raison d’être in an active subversive way, blurring the lines between inner and outer life. The works often contain a certain form of performativity; a staging intervening both on a physical and psychological level, made out of elements, which seduce, manipulate and manifest as a different material consciousness, reality or “truth”.