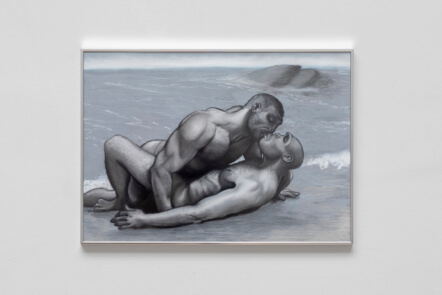 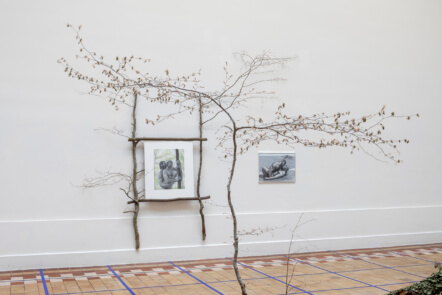 Homo Homo Neanderthalensis and Sapiens (In the Field)
Graphite on paper, custom framing

“The work “Homo Homo” depicts scenes of love, intimacy and sensuality between same-sex members of our evolutionary hominid family. The way I see pre-history, it is equally as malleable as the future, since thousands, if not millions of years can change radically with one new discovery or a new analysis. Neanderthals made art and even Homo Ergaster controlled fire…

For me the volatile matter of human antiquity is the potent, ever-changing bedrock that our lives are built and shifting on. The deep past has potential, not only to inform us of what happened, but in its attempts, to reveal what we perceive the contemporary to be. Is an open and free attitude towards who and how people love a sign of progress? Or is the fact that this can be an issue a product of modern or pre-modern social control?

I like to think of it in this way: Of course two men or two women figured out how to love one another before anyone invented a stone axe.”- Rasmus