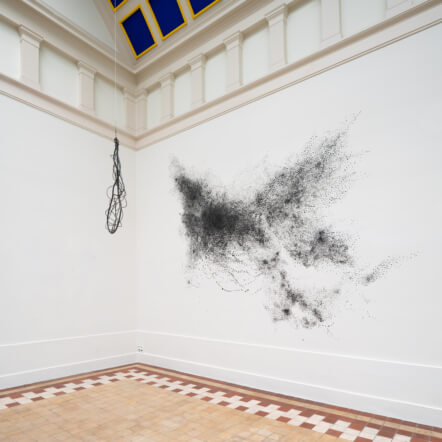 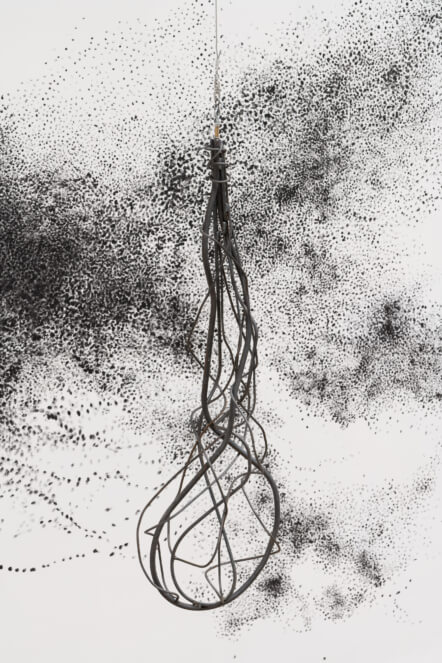 Nina Helledie
Where it all started – Contraction –
Fyrtårn / The silent noise – When everything stops, what is left?
Wall painting, sculpture, theatrical performance

The works Where it all started and Contraction deals with a man-made environment that in an increasing way invades our lives. Directing the attention towards the physical and psychological ramifications of the noise and the stressful tensions that come with a constant information flow or diverted online presence, the works point to an outer and inner silence constantly interrupted by alarming tension or noise on the line. In the Sculpture Hall, the wall painting’s point technique refers to the amount of time that goes into producing the work, through which it opposes the pressure of busyness, at the same time as the iron mobile rotates constricted around its own axis. Together they pinpoint the silent noise that most of us know all too well. The system’s failings are diagnosed and the silence brought into focus, not as emptiness but rather as a potential way to find release.

In her practice Nina Helledie is engaged with the ambivalence of the functional and disfunctional relation between the body and mind. Helledie primarily works with installation, performance, sculpture and drawing, where she for a number of years has developed a technique and has produced works consisting of dots in organically given shapes on paper and wall, materialising the noise, and with it the absence of silence, as a phenomenon and a condition, which increasingly defines the modern live.

As a part of the project the theatrical performance Fyrtårn / The silent noise – When everything stops, what is left? is shown from June 19-21th at Teater Momentum in Odense.