“Line Larsen is a Norwegian multi-artist based in Copenhagen. Her works vary from public interventions, drawings, photos, videos, sculptures, text pieces to real life projects.
She is currently working on starting a spiritual cult in Amager and a new series of multifunctional art pieces, The Helping Bird being the frst: a moving sculpture, a dust buster, a snack server and always the life of the party.
For a period of time Larsen worked under the name Virg, after she made a tree in the forest rotate and it was referred to as a ballerina and she wanted her gender to be unmentioned. In her spare time she takes care of stray cats, shoots her fathers guns and has ambitions to become an actor or scooter’s backup dancer or marry Yung Lean.”

“Allan Cruz is a visual artist currently studying at Det Fynske Kunstakademi in Denmark. Cruz was born in Costa Rica in 1985, and moved to Spain in 2006. For 11 years he lived in a number of diferent cities, such as Bilbao, Barcelona, Bordeaux, Malmo, Gothenburg, Berlin and Copenhagen.
Occasionally commenting on dystopian and controversial subjects, his art practice explores diferent social constructions and rigid notions of reality, morals, perception, society, politics and norms. Cruz implements a broad range of media, from installation to performance but mostly focusing on video as a platform for his artwork.”

Free stick and poke tattoos and cheap drinks at the opening.
Free entry. 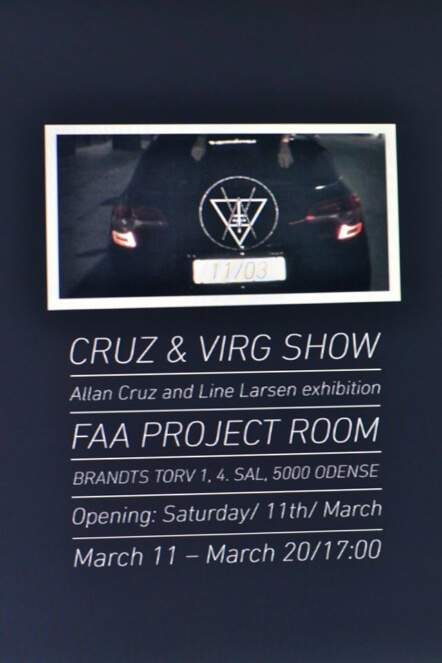 « Art in the slow cooker

In a Landscape of Having to Repeat